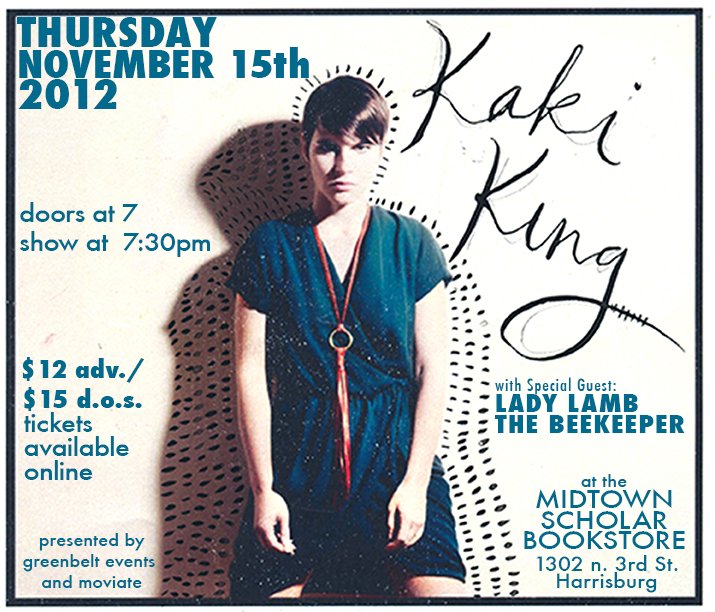 with special guest LADY LAMB THE BEEKEEPER (from Portland, Maine)

TICKETS ALSO AVAILABLE AT LITTLE AMPS COFFEE (Green and Meunch St.) and all 3 locations of 717 Tattoo!

Hailed by Rolling Stone as “a genre unto herself,” Kaki King is a true iconoclast, a visionary musician/artist whose singular work rightly stands out amongst the easily formatted. Over her decade-long career thus far, the Brooklyn-based guitarist/composer has recorded five extraordinarily diverse and distinctive LPs, performed with such icons as Foo Fighters, Timbaland, and The Mountain Goats, contributed to a variety of film and TV soundtracks (spanning Golden Globe-nominated work on Sean Penn’s Into The Wild to scoring – and appearing in as guitar-playing hand double – the acclaimed 2007 drama, August Rush), and played to ever-growing audiences on innumerable world tours. Each twist and veer marked the turning of a page, another step forward on a truly exceptional musical path. Beginning with 2002’s Everybody Loves You – to date, her only fully acoustic guitar recording – King has expanded and reconceived the role of the solo instrumental artist, constantly kicking at the boundaries of what’s expected.

Glow, her groundbreaking new Velour Music Group release, is both indescribable and definitive, an evocative, exuberant collection of genre agnostic soundscapes, rich with wit, theme, and inspired invention. From the chamberesque “Great Round Burn” through the propulsive, Celtic-colored “King Pizel,” the album embraces a doggedly naturalist production ethos to showcase King’s protean songwriting and mesmeric fretboard genius. While her emblematic usage of imaginative tunings, rare instruments, and idiosyncratic percussive techniques are all featured to their fullest effect, the undeniable lodestar of Glow is Kaki King’s remarkable, reverberant guitar.

“This is a guitar record,” she says. “This is the sound of a person playing guitar. Whatever additions we made, the fundamental of this record is still one person playing a guitar. That’s who I am.”

Glow marks a kind of artistic reboot for King, whose most recent recordings integrated traditional songcraft, additional musicians, and her own vocal stylings, all in pursuit of her tenaciously individualistic sonic vision. Though critically acclaimed, the release of 2010’s band-oriented Junior was followed by a self-described “existential crisis.” Thrown by the unplanned directions her life and music had taken, King was suddenly hesitant of the way forward.

“A lot of life happened between this record and the last one,” she says. “There was a lot of serious doubt, a lot of fear, wondering if I wanted to do this anymore. I didn’t know if being a musician was how it was going to be for me. I’ve been playing guitar since I was 4 years old, I’ve known no other life, so the question became, is this really what I’m going to spend the rest of my life doing?”

A worldwide solo tour proved just the ticket for clearing her head and restoring her perspective. Dubbed “The Traveling Freak Guitar Show Tour,” the international trek – which saw King accompanied onstage only by a scope of esoteric stringed instruments – allowed the prodigious guitarist to reconnect with her symbiotic musical partner.

“I thought, okay, let’s go back to what we know,” King says, “and what we know how to do is play guitar. That’s where I’ve always been able to shine, for myself, without any doubts.”

In March 2012, King paid a visit to Casa Chica, Incubus guitarist Mike Einziger’s Malibu home studio. With “very little concept other than I wanted to play guitar,” she laid down an intriguing series of solo tracks and demos. Upon her return home, King considered how best to proceed. Having previously worked with such highly regarded producers as Malcolm Burn and John McEntire, this time she simply hoped to find a sympathetic mixer/ engineer, someone who had “the ability to find and create magical sounds.” Enter D. James Goodwin, producer, engineer, mixer, and owner of the residential Woodstock, NY studio, The Isokon. An early playback of Behold! This Dreamer by Thieving Irons, an album featuring her frequent collaborator Dan Brantigan and engineered by Goodwin, convinced King that she had found her collaborative partner.

“I could tell that this guy heard things that I never could,” she says.

In the weeks leading up the sessions, King was contacted by the acclaimed New York- based string quartet, ETHEL, wondering if she might like to work with them sometime in the distant future.

“Classical performance programs are usually set up two years in advance,” King explains, “so I said, ‘How about we do something together now?’

Armed with a like-minded co-producer, a gifted string quartet, and a fistful of intriguing new songs, King headed to bucolic Woodstock in mid-May. The Isokon proved an ideal working environment and Goodwin, a genuinely simpatico collaborator. King set to work in as spontaneous and organic a fashion as possible, consciously placing few impediments on the creative flow.

“Our attitude was, let’s just start,” King says. “Let’s not discuss. Let’s just pick up something and see where it takes us. And that took us places that were very unexpected.”

Inspiration flowed from an array of influences and ideas. “Cargo Cult” and the kinetic “Kelvinator, Kelvinator” see King exploring the “uncharted territory” of Open D minor tuning, while a number of other tracks were born of the “tiny, bright sound” created by her treasured Veillette Gryphon High 12. King declares the high-strung 12-string guitar to be “a songwriting machine. I want to make a whole record with that little guy. It’s almost like you sit down with it and things just come out underneath your fingers.”

While her concentration was firmly aimed towards her guitar, King is also personally responsible for Glow’s complete sonic scrum, including all percussion. Also present are such creative colorings as bagpipes, string arrangements, and the occasional bass part (played by Goodwin). Notably absent is her characteristic vocalizing, though their exclusion is less by design than by the demands of the material.

“Vocals just didn’t write themselves,” King says. “If something had spoken to me, we would have set up a vocal mic immediately, but it just didn’t and it would have interfered with the process to try and force it.”

Glow finishes on an intriguingly somber note with “March Slav,” a haunting piece inspired by Goodwin and King’s mutual fascination with Russian history and the Soviet aesthetic, its title of course borrowed from Tchaikovsky. That closing nod to the great Russian composer points to King’s emerging interest in contemporary classical and new music. Future plans include teaming with ETHEL on an upcoming Bach performance, while Pulitzer Prize-winning composer David Lang has commissioned her to write a piece for a series he’ll be curating at Carnegie Hall.

Having spent the last decade restlessly adventuring, the afterglow of Glow finds Kaki King considerably more settled, though no less curious and artistically ambitious. Always a resolutely freethinking musician, a new and vast range of possibilities seems to have opened up for the ever-evolving, always unconventional King.