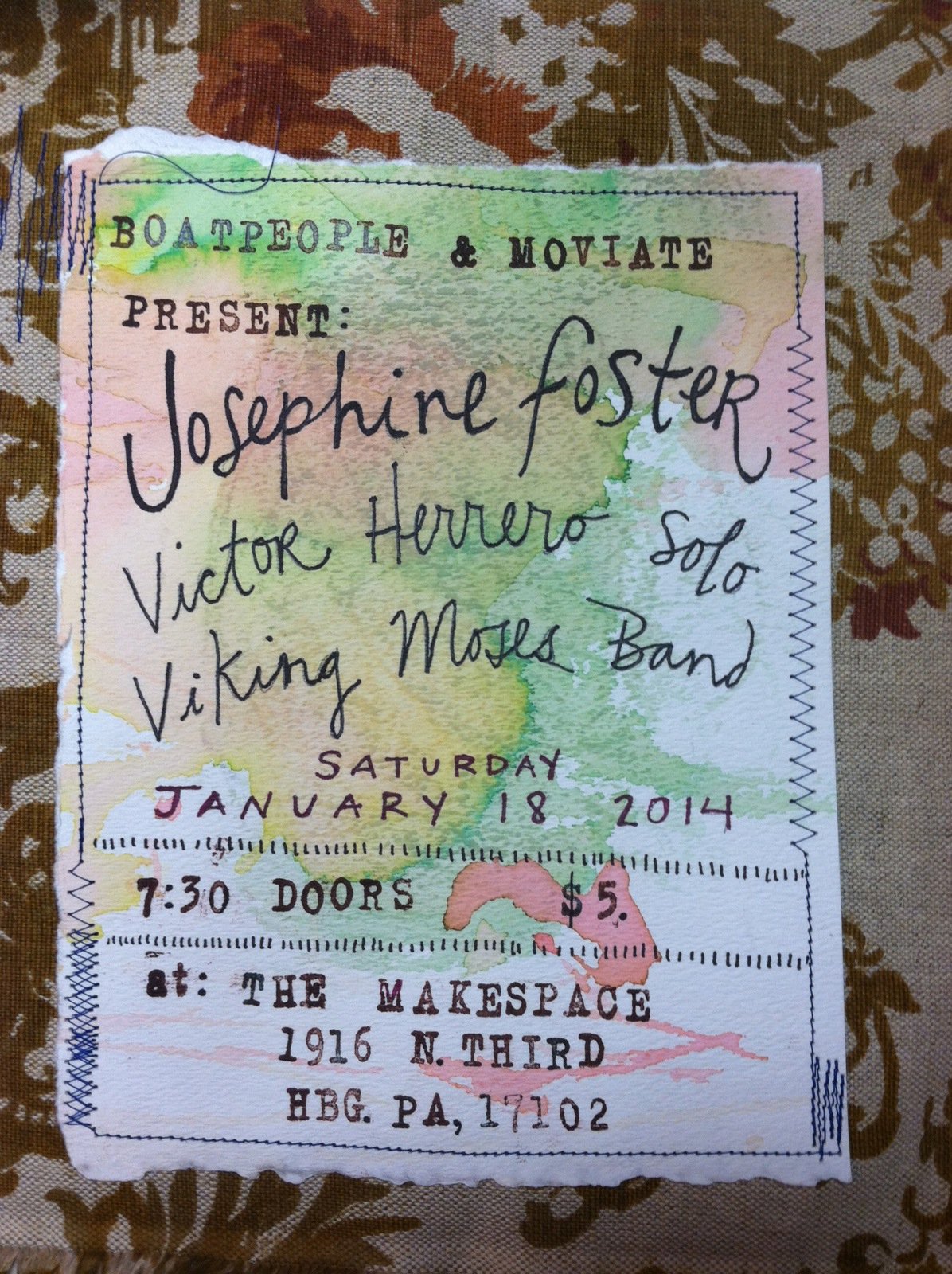 BoatPeople and Moviate are thrilled to present an evening with

JOSEPHINE FOSTER is a modern American folk singer-songwriter and musician from Colorado. As an adolescent she worked as a funeral and wedding singer, and aspired to become an opera singer. Several years later she abandoned the idea and began to record demos of her songs, resulting in the early recordings There are Eyes Above (2000), an album of ukulele accompanied songs strongly influenced by Tin Pan Alley, and a short album of children's songs, Little Life (2001).

In 2004 joined by her occasional backing band The Supposed, Josephine released an album of psychedelic rock called 'All the Leaves Are Gone' which has drawn comparison to Patti Smith and Jefferson Airplane. The songs on her first solo studio album 'Hazel Eyes, I Will Lead You' (2005) evoke early American folk and blues forms of the early 20th century. 'A Wolf in Sheep's Clothing' released in 2006, features unorthodox interpretations of 19th century German art-songs. Her third solo album 'This Coming Gladness' was released in 2008. 'Graphic as a Star' was released in 2010.

In 2012, she returned to Colorado to record a solo album Blood Rushing which took inspiration from local themes from her childhood such as the western geography, native rhythms, and imagined mythology. It featured the ensemble of Victor Herrero on classical and electric guitars, Paz Lenchantin (Zwan, Pixies, Entrance Band) on bass, Heather Trost (A Hawk and a Hacksaw) on violin, and Ben Trimble on pueblo skin drums and was chosen among the best albums of 2012 in the WIRE.

Josephine returns in 2013 with her new album 'I'm A Dreamer'.

"It's a pretty much perfect set, a quiet masterclass in songwriting with melodies that find the sweet spot in unexpected places and a self-possessed beauty that only grows with every listen." 5*s

"Fosters vocal endows each line with the power of flight"

"infused with a joyous communal warmth - 4/5"

VIKING MOSES (Full Band), AKA Brendon Massei, achieves a special balance of warmth and command, with familiar melodies that draw listeners in and oblige them to stay. Strongly lyrical songs are played out through tunes that flirt with pop, folk, indie, grunge and americana, all strung together with a unique pulsing guitar, and by Massei’s robust voice, which ebbs from delicate whispers to throaty howls.

20 years and counting, Massei has won over fans and critics not only with the delicate melodies of his songs, but also through his versatility as a performer — his live show is as compelling in a living room as it is in a major venue, and his songs as natural in a movie soundtrack as on a record player. The lore of Massei’s outsider lifestyle has won him interest and praise.

2013 sees the release of “Werewolves Across America”, a feature-length documentary by directors D.A.R.Y.L. (directors of “Katy Perry: Part Of Me”) about Massei’s life and lifestyle as a touring musician. Massei’s music also features on UK feature film “Kelly + Victor” (2012) and documentary film “The Legend Of Masty Huba” (2011).

Massei is now adding the finishing touches of a new conceptual album, to be titled “Jahiliyah”.

“If the DIY house show circuit has a pied piper, his name is Brendon Massei. Massei, who plays music under the name Viking Moses, has been recording and touring independently as a full-time job since he was 14, and he’s spent more than half of his life paving trails for other musicians to follow. Artists that Massei took on their first tours include: Deer Tick, Scout Niblett and Nat Baldwyn of the Dirty Projectors.”

“Viking Moses is ‘The Most Uniquely talented musician since Kurt Cobain… an absolute genius, and one of the best musicians I have ever released.”

VICTOR HERRERO was introduced to music in his childhood while living in the famous monastery Franco erected in a mountain valley west of Madrid (El Valle de los Caídos). There he learned to sing Gregorian and Mozarabic chant under the guidance of Benedictine monks. As a teenager back in his hometown Toledo he formed a psych-rock outfit called ‘Cicely’, which grew into a popular Madrid-based band. The group lasted 8 years, after which Victor recorded and released an album of his solo piano compositions "Connotaciones para Piano" (Sello Autor - SGAE, 2006) under his old stage name “Victor Cicely”. Shortly after this period, Victor met his wife the US artist Josephine Foster. He plays lead guitar on her albums “This Coming Gladness” (Bo’Weavil Recordings, 2008) as well as on her two solo albums; “Blood Rushing” (Fire Records, 2012) and the forthcoming “I´m a Dreamer” (Fire Records, 2013). In May 2013, Herrero released his third solo album, “Estampida”, a collection of original songs written in Spanish, on Foehn Records and Windbell Records Japan.