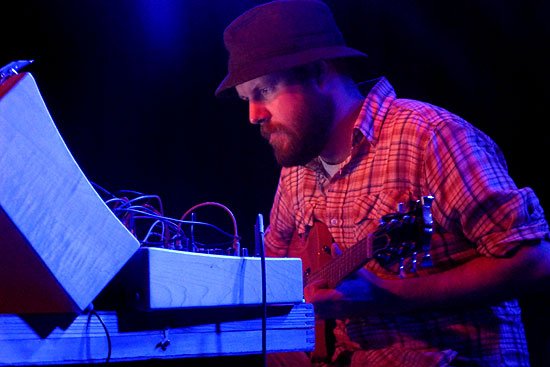 Koen Holtkamp creates music that exists simultaneously in large and small scales. His compositions lend themselves to careful examination, with each sound precisely placed. Holtkamp (who is one-half of Mountains) considers every instrument he uses carefully and pays specific attention to the environment, actual or digital, in which that instrument is being recorded and processed. They also expand and evolve gradually, giving a sense of boundlessness that extends not only to a specific song or album, but also to his discography as a whole. On "Motion" (Koens new LP), Holtkamp plays with these ideas of scale and space, using shifting array of analog, digital and acoustic sources to explore the perceived effect of moving from one dynamic space to another. He excels at coaxing the sublime out of the synthetic, writing music that seems as if it has existed in nature for eons, but can only now be uncovered using modern electronic instrumentation.

While Holtkamp traditionally composes based on material developed during live performances, the first three tracks on Motion were written and realized entirely in the studio. This approach gave him the opportunity to really hone in on each separate instrument individually allowing for a deeper sense of focus and less of a reliance on live sampling and looping. “Vert” features some of the most prominent, even aggressive, use of electric guitar in any of his work. On “Crotales” Holtkamp juxtaposes iridescent analog synths and virtual “acoustic” instruments such as computer generated upright bass and crotales, offering a surreal take on his archetypal approach. The entire b-side is occupied by the sprawling “Endlessness,” a richly textured swell of overlapping drones and chirping synthesizers.

Motion is presented as a stand-alone LP, and is also available as an extended CD release coupled with a second disc of Connected Works, compiling all of Holtkamp’s vinyl-only releases digitally for the first time. This includes Liquid Light Forms (Barge, 2013), Gravity/Bees (Thrill Jockey 2010), and Make Haste (A Room Forever, 2008). Listening to these albums all together only serves to reinforce a direct through line in his solo works, his techniques and timbral palate evolving as steadily and gradually as the pieces themselves.