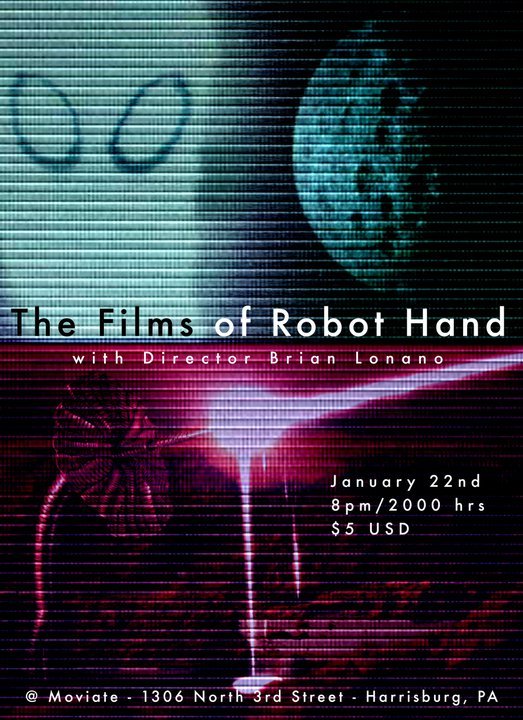 The films of ROBOT HAND have been Artsfest Film Festival favorites in the past, and we are delighted to finally bring Director Brian Lonano and his team of fellow filmmakers to Moviate. Two of the films presented in the program will be premieres that have not screened previously in any other festival or program. Following the films, Brian and his team will share insight on the use of practical effects over CGI, the importance of the short film format for aspiring filmmakers, navigating the film festival circuit, and micro-budget filmmaking.

The work of ROBOT HAND is entirely self-produced and is an amazing DIY effort for film fans of the Sci-Fi genre and fellow filmmakers alike. Please join us in supporting the true spirit of independent cinema by discovering the unique and inventive vision created by ROBOT HAND!

Casket Climber Insect God - 2:38 - (music video) 2:38 / 2006 -Teeth Man spends time around his casket with a monstrous insect and other horrid creatures before transforming into one himself.

ATTACKAZOIDS, DEPLOY!! (short film) 4:16 / 2009 - War is declared on the off world settlement and everyone on earth unites to deploy an army of giant robots.

Martian Precursor (short film) 1:00 / 2010 - A homeless man is tormented by transmissions from the Planet Mars.

CARNY (short student film directed by Kevin Lonano) - 10ish minutes / 2010 - The Psycho-Fugue Circus executes one of their own for murdering the Headline act. *PREMIERE