WXPN WELCOMES...THE SECRET TO A HAPPY ENDING A Documentary About The DRIVE BY TRUCKERS 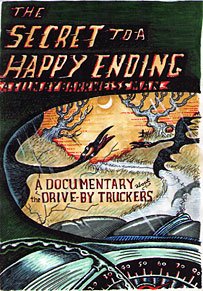 WXPN WELCOMES...THE SECRET TO A HAPPY ENDING
A Documentary About The DRIVE BY TRUCKERS:

PRIZE GIVEAWAY!
One lucky attendee at the screening will win a copy of the film poster SIGNED by all the band members. This is a limited-run 12 x 18 poster designed by Wes Freed, the Richmond, VA-based artist who has designed numerous DBT album covers and tour posters and who is featured in the film.

THE SECRET TO A HAPPY ENDING documents the Drive-By Truckers and their congregation of fans as they explore tales of human weakness and redemption. Filmmaker Barr Weissman followed the band during three critical years of touring and recording -- years in which the band struggles to overcome the trauma of divorce and survives a near breakup. The film features band interviews, behind-the-scenes footage on the road and in the studio, and legendary live performances. Reflective of the band's roots in Alabama and Georgia, the film explores the changing American South -- its culture, economy and history. (101 minutes, 2010)

“Universal themes such as teenage alienation and the liberating power of music emerge, allowing the film to appeal beyond current fans to a wider swath of music and movie lovers.”
– Mike Snider, USA Today

"The film captures the singular blend of grit, sensitivity, stamina and acute songwriting that have led admirers to compare them to Neil Young, William Faulkner, the Replacements and Robert Penn Warren."
– Ann Hornaday, The Washington Post