Pier Pasolini's "The Gospel According to St. Matthew" on 16mm film! 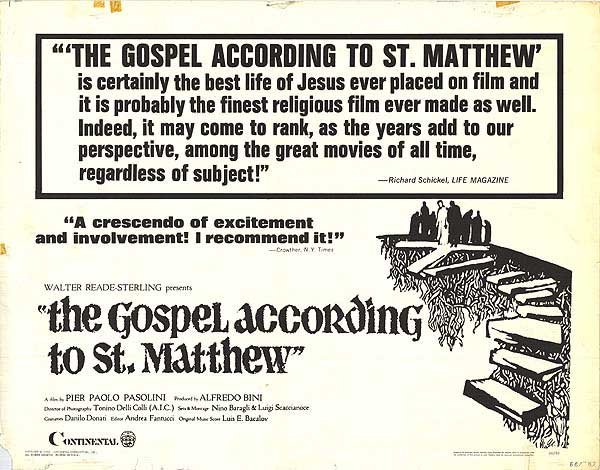 "THE GOSPEL ACCORDING TO ST. MATTHEW" by PIER PAOLO PASOLINI, on 16mm film. 8pm, $5 donation. Pier Paolo Pasolini was an atheist, indeed a Marxist, and his The Gospel According to Matthew is routinely interpreted as a proto-Marxist allegory. Yet Pasolini was perhaps first of all a poet, and the concepts of the sacred and the divine, far from repelling him as so much religious superstition, held for him a powerful appeal. In 1962 he came to Assisi in response to Pope John XXIII’s call for dialogue with non-Christian artists. While there, he read through a book of the Gospels "from beginning to end, like a novel," later proclaiming the story of Jesus "the most exalting thing one can read." As a result of this experience, Pasolini became consumed with the notion of filming the life of Christ straight from one of the Gospels, shooting without a screenplay and taking no editorial license with the text. After completing The Gospel According to Matthew, he dedicated it "to the dear happy familiar memory of John XXIII."