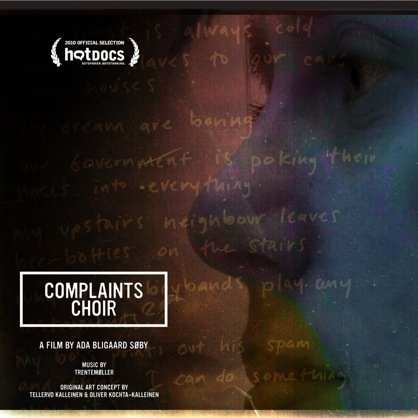 "What are you complaining about? This is the question that two Finnish artists have journeyed out to ask people in all four corners of the world in documentary director Ada Bligaard Søby's docu-musical. Their aim is not to pour salt in the wounds of the world's grumpy complainers, but to let everyone vent their dissatisfaction about everything from parking fines to climate change in a liberating chorus of whining harmonies. We are taken to places such as Chicago and Singapore, and even if the cultures vary, it's obvious that complaining is a basic human trait, and it is tackled with a deadpan approach by the two Finns. Ada Bligaard Søby has, in a short space of time, made her mark as an original new name in the Danish film world, among other things with last year's poetic New York postcard 'Black Heart'. With 'Complaints Choir' she is adding a promising first feature to her resume."