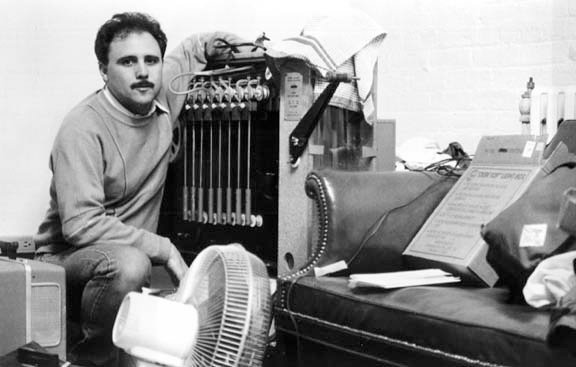 Jim Hubbard was born in Brooklyn, NY in 1951. He studied at the San Francisco Art Institute and began making films in 1975. In 1977, he began processing his own film and enjoys exploring the material basis of film. He believes that experimental film can more honestly communicate the lesbian/gay experience and is much less alienating than stupid narrative movies with homosexual characters. He has made 17 films including Homosexual Desire in Minnesota, Two Marches and Stop the Movie (Cruising) and a 16mm cinemascope, hand-processed meditation on death entitled Memento Mori. In 1987, he co-founded the New York Lesbian and Gay Experimental Film Festival and worked as the film archivist at Anthology Film Archives. His films have been shown at the Berlin International Film Festival, the London Film Festival, the Museum of Modern Art and the Tokyo, Hamburg, New York, San Francisco, Los Angeles and numerous other lesbian/gay film festivals. He believes that beauty and good politics are one. He lives with his lover of 15 years, Nelson Gonzalez, in New York City.

“Jim Hubbard’s films are a deft combination of personal and political. He explores universal subjects: AIDS, illness, protest, eulogy and liberation with a distinctly queer lens. He documents and celebrates life that creates art in the face of immense obstruction. Hubbard’s handmade films of demonstrations and early gay marches vary in light and texture, his frames exclude banners, leaving you free to observe [often in silence] the expressions and gestures of the demonstrators. In his later works, he creates personal short films about artists, their triumphs and struggles. These films impart a sense of poignancy and brotherly loving in the age of AIDS. Jim Hubbard has been hand-processing films since 1974. He is the co-founder of MIX: The New York Lesbian/Gay Experimental Film/Video Festival, which at 15 is the eldest queer film festival in New York City. He most recently curated “Fever in the Archive: AIDS Activist Video and Film from the Royal S. Marks Collection” at the Guggenheim Museum. As an archivist, curator and experimental filmmaker, Jim is committed to the preservation and documentation of queer moving images. His films are testimonials to these commitments.” (Scott Berry)

“So, if we are to expose the truth, dig deeper into the meaning of things, create beautiful images, tell something about our true selves,
change the world, in short, to be artists, we have no choice. A life as a radical gay man or lesbian and as an artist demands a radical vision and a radical art.” (Jim Hubbard)

FILMS TO BE SCREENED:
MEMENTO MORI

Memento Mori tells about death, about the death of a friend of the filmmaker's. It surpasses the formal inventory of feature film cinema to develop its own narrative structure as a filmic poem. As such, it is very precise in its filmic structure as well as in its narrative structure. Film means the combination of created images in a timely construction. Jim Hubbard chooses the format of Cinemascope -- not as a visual gag, but as a necessary means to communicate his visual motives. One thinks of painting, regarding the composed images which seem metaphoric at first glance. But when Hubbard shows a skull, or his friend in front of a still life, or a woman cleaning a room, he does not -- as is common in contemporary gay filmmaking -- juggle with metaphors and symbols, but shows -- through the art of filming and montage -- what lies behind the symbolic connotations of the images on screen: What is it like when a body doesn't move anymore? How does it feel -- the ashes of the dead or the soil which covers a corpse? We thought of the late films of Marguerite Duras, in which she tries quite similarly to find images that astonish in spite of the cultural baggage they convey. In his books about cinema, the French philosopher, the late Gilles Deleuze, calls such a non-illusionist, time-bound composition of images, which only is possible in cinema, "direct time images," images that open up a new look upon the world. There we are, where we started: Hubbard's film tells about death. Most paradoxical however -- Memento Mori is one of the few films, in which cinematic images do not erase life with stereotypes but let life live on, somewhere else, outside the screen. Thus, Hubbard states more convincingly than any surface statement that the basic premise of every emancipatory thought is the affirmation of life. In this context, the final image of Memento Mori is one of the most haunting and beautiful we experienced. -- Stefan Hayn

ELEGY IN THE STREETS

While attempting to define a filmic equivalent of the elegiac form, this film explores the AIDS crisis from both a personal and a political perspective. The film intertwines two main motifs: memories of Roger Jacoby and the development of a mass response to AIDS. The collective response begins with mourning at a candlelight vigil and the deep sadness of the AIDS Quilt and then progresses toward a much more determined reaction by ACT-UP: first, in the Gay Pride March in New York, then in separate demonstrations that build in militancy -- with a corresponding increasingly heavy-handed response by the police -- culminating in a demonstration during a baseball game and the thumbs-up sign of a teenager sporting a Silence = Death button.

"...roars with urgency from beginning to end." -- Karl Soehnlein, Outweek

"...exquisitely hand processed...miniature portraits of a friend...infusing his memorial not with nostalgia, but activism." -- Manohla Dargis, Village Voice