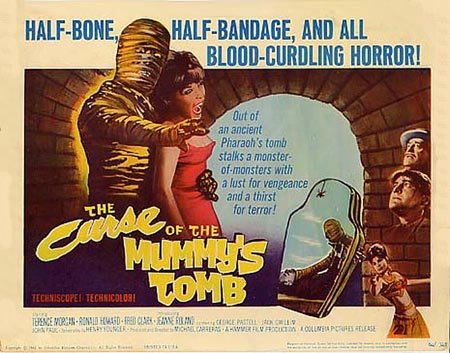 This cheap, but colorful British period horror piece follows an ill-fated archaeological expedition to the cursed tomb of the pharaoh, Ra-Antef, whose sarcophagus the team's leader opts to sell to a smooth-talking American promoter who intends to set it up as part of an exploitive side-show attraction. No sooner has the tomb reached the States than the foul-tempered pharaoh is released; he then begins stalking and strangling all those who have desecrated his resting place. The bandaged one's vendetta doesn't stop there; he also has a score to settle with the reincarnation of a man who betrayed him eons ago.