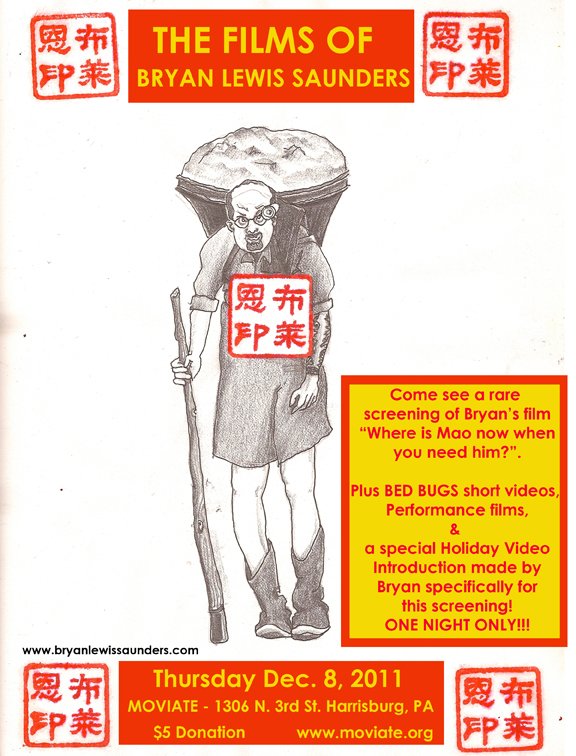 THE FILMS OF BRYAN LEWIS SAUNDERS:

Come out for a program of Films and Videos created by Performance / Spoken Word / Visual Artist BRYAN LEWIS SAUNDERS. We will be doing a rare screening of his first film "Where is Mao now when you need him?", shot by Bryan in China. Plus his BED BUGS short videos, films made in collaboration with local filmmaker Jim Hollenbaugh, and a special Holiday Video that was made specifically by Bryan for this screening only! One night only! If you enjoyed Bryan when he performed at Moviate you won't want to miss this screening!

From Wikipedia:
Bryan Lewis Saunders (born 1969, in Washington, D.C.) is a performance artist, videographer, and performance poet widely known for his disturbing spoken word rants, tragic art performances and Stand up tragedy.[1] On March 30, 1995, Bryan began drawing at least one self-portrait every day for the rest of his life.[2] For 11 days in 2001, Bryan conducted an experiment in which he ingested or inhaled a different intoxicant everyday and created a self-portrait under the influence documenting the effects of his altered perception.[3] In January 2011, a selection of the drug induced self-portraits presented online went viral.[4] In 2003, Bryan began sleeping with a cassette recorder and documenting both his dreams and somniloquy which led to a wealth of source material for both audio releases and books. The transcriptions of his lengthy somniloquy led to what is known as the Stream of unconsciousness (narrative mode) method of writing.[5]