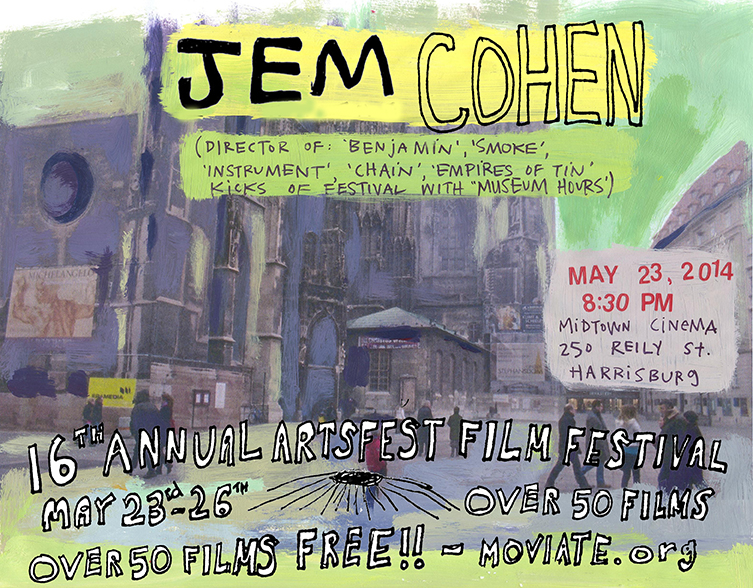 11AM: Know Your Environment!

“The Human Experiment” by Dana Nachman and Don Hardy.

-What if the greatest chemical disaster of our time did not involve oil spills or nuclear meltdowns? Instead, imagine much lower levels of exposure, inflicted over several generations and affecting every person on the planet. The result: rising rates of everything from cancer to autism to infertility.  Narrated by Sean Penn. 90 min. Documentary. (USA)

-The filmmakers leave the classical nature film behind in order to explore new ways of conceptualizing our understanding of nature and ourselves. A hitherto familiar environment develops strange characteristics and meanders between stagnation and movement, realism and hypnosis, naturalness and artificiality. 13 min. (Germany)

-Hong-Kong is one of the densest cities in the world. As there is no much space available, new towns are adjacent to the cemeteries. These days in Hong-Kong the world of the living coexists with the one of the dead. Meanwhile, Hong Kong inhabitants move from place to place. They are waiting for a final displacement.  9 min. (UK)

“MY MOST HANDSOME MONSTER” by Madsen Minax

-an experimental documentary that explores the British capital with a very specific point-of-view, locked in photography that never gets more than three inches off the ground, along with heavy manipulation of both sound and image, exposing a London seldom examined: a city that moves poetically and with great order when observed slowly and in minute detail.  8 min. (USA)

-A ride towards the sea is the odyssey of a small animated character who decides to go out to face the city and the nature to free his goldfish. But the cadence of his own will reserve for him numerous surprises: every person, every element of the city which he will cross could be violent to him. (Animation, France, 3 min)

-This brief work is yet another psychodrama-with-a-smile from a middle-age worry wart. I vaguely remember my teenage years when I filmed (on Super8) gritty, raw, angry psychodramas. Now I prefer to use a touch of wit and self-deprecation. Gee, I must be getting old. I mean, MATURE.  3 min.  (USA)

“Man Vs. Ultraman”  by Michael Rader

-The task of painting a portrait is given to an artist who unearths more about himself in the undertaking than expected. The painting takes 'The Man' through a whimsical and dark journey of self exploration as he attempts to trust himself. In the self contained space of the artists studio, 'The Man' finds himself in a fantastical bucolic environment in which to nurture himself. 40 min (USA)

“What Cheer”  by Michael Slavens

- After the sudden passing of his wife, Stan (Richard Kind) finds himself in a state of shock. He tries to ignore his pain but finds himself followed by inescapable grief, or rather, followed by the inescapable What Cheer? Brigade, a 20-piece brass and percussion band drowning out his world with boisterous, ear-numbing song. 18 min. (USA)

-A man believes he murdered his wife and suspected lover in a jealous rage -- then discovers the real truth -- or maybe not? 14 min. (Pennsylvania)

-'Epistolary Fusillades' is an examination of the fractured nature of contemporary thought, and the possibility of using collage to create a new coherence. 18min. (USA)

4PM: From the DYI Underground

-Smart yet stupid, dynamic yet mischievous, happy yet desperate, Mr. Triangle head is an interesting animated character, but he could also be you, or me, or anybody around us. He has a strong attitude about his life, that may help him, and may destroy him. 3 min. (Singapore)

-Love Ball: Ball on Fire is one ball's journey to recover something precious it has lost. It is an analogy for the lengths we will go to for our loved ones. 4 min. animation, Central PA

-Dignity Pastures Funeral Home takes great pride in assisting families to grieve their lost and will give you a respectable and dignified service...no matter what happens. 3 min.(USA)

“When Objects Attack”  by

11PM “I ALWAYS SAID YES: THE MANY LIVES OF WAKEFIELD POOLE” (93 min., documentary)

- A female poet finding her voice and making her niche among some of the most revered men of the counterculture. Taking refuge with Gregory Corso and other Beat poets in the Village as a teenager escaping the suffocation of conformity. Losing her unwanted virginity to Allen Ginsberg's lover, Peter Orlovsky. Discovering disappointment in the arms of her hero Jack Kerouac (45 min.)

An intimate portrait of legendary photographer Larry Keenan capturing the transformation of the Beat Generation into the burgeoning 60's rock counterculture and his visionary work beyond. 39 min. (USA)

-With photography, change is inherent in documentation. As humans change their physical environs, they change the physical and conceptual landscape for photography. 5 min. (USA)

“The Perfect Hello” by Zack Kasten

-The short narrative revolves around Wade Perkins, a fifty-five year old motivational speaker at the end of his rope. After learning of his younger brothers demise, he embarks on an alcoholic bender through middle America accompanied by a mysterious young woman named Sweetheart.  41 min. (USA)

-Technology today advances so quickly that we leave a trail of obsolescence behind us. This piece blends video production machinery spanning 25 years to create an experience that's unable to be placed to one decade of time. 7 min. (USA)

“Love in The City”  by Emanuele Michetti

-In a big city where everything moves too fast and everyone is too busy, there is no time to relax. How can relationships evolve? 4 min. b/w, 16mm. (USA)

-Inversion creates an open space to expand female consciousness, as an embodiment of the film itself. Shot, edited and finished in 16mm, this film showcases the intricacies and beauty of the film medium, in creating a new dialog between filmmaker, camera and subject. 12 min. color, 16mm. (USA)

-Opening our eyes each new day, we stare for a few minutes into space, seeing the first sights, hearing the first sounds. It is neither night nor day but something

in-between. Fragments of dreams refusing to expire, the grip of the day not yet upon us, memory and desire hovering around the edges... 7 min. animation (CANADA)

-Experimental 7.5 minutes consisting of a cast of thousands of talking heads in different languages and emotions (laughing, crying, arguing) merging abstractly into one universal head, evoking the fleeting oneness of humanity.

-'Passages' follows two consecutive days in the life of a young child who is experiencing inner turmoil as he tries to cope not only with a recent major life event but also with an on-going daily personal struggle. 7 min. (Bermuda/China)

-A domestic couple are thrust into a crisis of extreme disconnection just moments before harshly unsympathetic guests arrive for a party.  22 min. (USA)

“Telleth of those who dwell in water” byVonno Arturo Ambriz

-Rufario Salamanca is sent to New Spain in order to serve Friar Bernardino, whose lifelong mission is to document every thing that grows on that region. Guided by a mysterious native woman, together with his mixed race brother and the friar, they sail into swampy waters, finding marvelous beasts; the main characters of ancient pagan stories. 19 min. (Mexico)

"The Byrd Who Flew Alone: The Triumphs And Tragedy Of Gene Clark" 110 min. Documentary, USA PREMIERE!

11AM: INSPIRATION FROM THE STREETS

-Each night in New York City, approximately 40,000 people go without a permanent home. "Street Soccer: New York" is the story of 12 homeless men who used soccer to change their destiny. The film follows a team of homeless New York City soccer players as they compete in the Street Soccer USA Cup, an annual 16-team soccer tournament for the homeless held in Washington D.C. During their journey, the players face challenges on and off the field, taking leaps to rebuild their lives.

“You Have His Eyes” by Christopher Wilson

- At three months old Christopher was adopted. 25 years later he reunited with his biological mother. He then began documenting his search for his father. An intense life changing experience is captured as Chris uncovers the dormant truths behind his biological family. 90 min. (USA)

-Two narratives clash violently in this meditative portrayal of disaffected youth set in a graveyard of abandoned mobile homes known as Sunset Edge. We follow a group of four aimless, suburban teenagers - they skateboard the park, sleep in the sun, and rummage through the decaying remains completely unaware that this is where a lonesome teen is confronting a horrific past. Day turns to night, people disappear, and the secrets of Sunset Edge are revealed in a paralyzing finale.

“Where We Belong”  by Krista Imbesi

-Orphanages create orphans. Unfortunately, well meaning Western aid workers often don't realize this darker side to the orphan crisis in Uganda. Due to cultural ignorance, and the demand for adoption ready children in the international sphere, families struggling financially are pressured into giving up and signing their rights to their children over to Western institutions. In Where We Belong, two Western run non profits struggle to find ways to help the orphan crisis without falling into these traps, and struggle to find their place within Ugandan culture. 56 min. (MECHANICSBURG, PENNSYLVANIA)

with“Letters on a Record Home”